As a young boy growing up on the Mississippi River delta, I felt strongly connected to nature. This, of course, was a little before the technology boom that brought us personal computers, Xbox games and the internet. 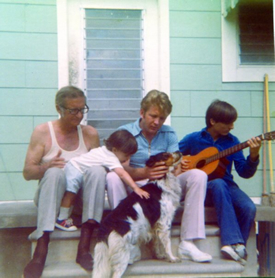 Oh, here we go. Only two sentences into this little article and I already sound like the old farts who preached to me as a child. “When I was your age, we didn’t have all those new fangled….” Well, whatever.

Hopefully, this won’t sound self righteous or condescending. Kids from any generation certainly can’t be blamed for what their era provides for them. But relative to this day and age, the kids I grew up with were more likely to spend their free time out of the house, roaming the neighborhood and bantering with friends. When we wanted to escape to an alternative universe, there were fewer options. The most important of which was our imaginations.

I recall spending many hours sitting on the concrete stoop attached to the rear of my family home where I taught myself to play guitar, or played with my dogs. Next to the stoop was a perpetually dripping water faucet. I would use that faucet to pour water for the dogs, but my hands were not strong enough to close the valve tightly, so it would continue dripping. There was always a little puddle on the ground underneath. 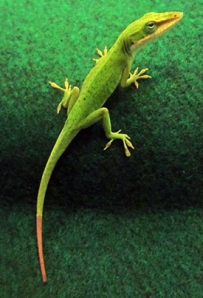 In the south Louisiana heat, a little fresh water will attract all kinds of critters. The area around this particular faucet was constantly visited by super cool green lizards. I loved watching those guys. They looked like miniature dragons or dinosaurs. My imagination would run wild with adventures of what life would be like if those lizards were gigantic, or if I was reduced to their size. It would be a short life, no doubt.

If you were really quick, you could catch one of these lizards with your bare hands. The only problem was that they would probably bite you in the process. They weren’t poisonous. The bite didn’t really hurt at all, but the idea of getting bit by one of these little creatures was still scary enough to give a young boy pause. The best approach was from behind, trying to catch it in a way that would minimize the risk of getting bit. Yep, I wasn’t taking these guys head on.

Now, apparently other animals felt this way about the lizards. Enough, in fact, that evolution provided these lizards with a particular protective adaptation. They possess a tail that will easily break off so they can escape while a predator is left with only a wiggling tail in its mouth, or, in my case, my hand. As long as my nerve remained anemic, I was unable to catch anything more than a tail that would oddly continue to wiggle for several minutes after it broke off in my hand.

Hang in there. I’m going somewhere with this.

Practicing guitar was a big part of my early years. By the time I got to college, I was rather accomplished. It wasn’t long before I began to realize that I would not fail to pass any audition I showed up at. However, in spite of knowing I was one of the most skilled players in the area, I still suffered from self esteem issues. I was mentally unprepared for success.

Like most guitar wielding young men, I had dreams of being on the big concert stage. I also wanted to record albums similar to those that inspired me to learn my craft. But, alas, for whatever reason my confidence was impaired. Word of my abilities spread and opportunities came my way, but I was afraid to act on them–afraid to take those challenges head on. I made excuses. Lame, cowardly excuses.

Now the universe has changed all around me. The music industry in no way resembles what it once was. I reflect on those dreams I once had and realize my music career is now at the wiggly tail stage.